"It's Alive!" The comedy genius Mel Brooks has adapted his legendary film into a hilariously brilliant stage creation. The grandson of the infamous Victor Frankenstein, Frederick Frankenstein (pronounced "Fronk-en-steen") inherits his family's estate in Transylvania. With the help of a hunchbacked sidekick, Igor, and the lovely lab assistant Inga, Frederick follows in his grandfather s footsteps. "It's Alive!" he exclaims as he gives rise to a creature to rival his grandfather's. And, of course, the monster escapes and hilarity ensues. All the famous lines from the film are there, along with such memorable tunes as "The Transylvania Mania," "He Vas My Boyfriend," and "Puttin' on the Ritz." Young Frankenstein will definitely tickle your funny bone, or at least have you smiling every five seconds!
Disclaimer: This is best enjoyed by teens & adults who enjoy bawdy humor.

This legendary parody of the horror film genre contains a healthy dose slapstick as well as all the bawdy humor and double entendre from the original film and may be best enjoyed by older audiences.

Mel Brooks is an American Icon and his cleverly written films and plays have shaped a generation of comedians and comedy lovers. This mix of clever jokes, fabulous dance numbers and Broadway musical flair from the 30's and 40's, creates a hilarious parody of the horror film genre every bit as inspired as the original film.

Water based haze, water based fog, live flames, pyrotechnics, strobe lighting and chemical based smoke may be used in this production.

The Bronson Children's Hospital Walk and Run will be occurring in downtown Kalamazoo on Sunday, September 24th between 1:00pm and 2:30pm. This may affect some of our patrons ability to get to the theatre along with parking availability for the 2:00pm curtain for 'Young Frankenstein'. 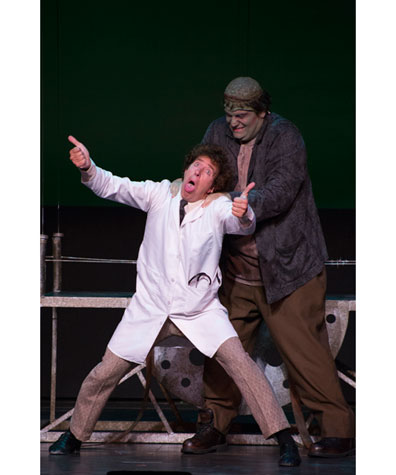