The Pirates of Penzance: In Concert | 2016-2017 Productions : The Kalamazoo Civic Theatre Set sail with this rollicking, delightfully funny tale of a band of soft-tempered pirates. Mistakenly apprenticed to a band of tenderhearted, orphaned pirates by his nursemaid Ruth at the age of eight, the handsome Frederic, upon completing his 21st year, rejoices that he has fulfilled his indentures and is now free to return to respectable society. But it turns out that he was born on February 29 in a leap year, and he remains apprenticed to the pirates until his 21st birthday! By the end of the opera, the pirates, a Major General who knows nothing of military strategy, his large family of beautiful but unwed daughters (including Mabel, who steals Frederic's heart) and a band of lily-livered policemen contribute to a cacophony that can only be silenced by Queen Victoria's name. Beloved since its premiere in 1879, The Pirates of Penzance is a delightful farce of classic fun for all ages!

Senior Class Reader's Theatre is designed to meet the needs of actors 50 and older. All productions are "reader's theatre" in nature, lines and lyrics are learned but not memorized.

The most well-known of all of Gilbert and Sullivan's operettas, Pirates of Penzance: In Concert is a fun, funny, energetic and fast paced comic enjoyment. While there may be an occasional bawdy pun or innuendo, it is overall silly and sweet and can be enjoyed by audiences of all ages. 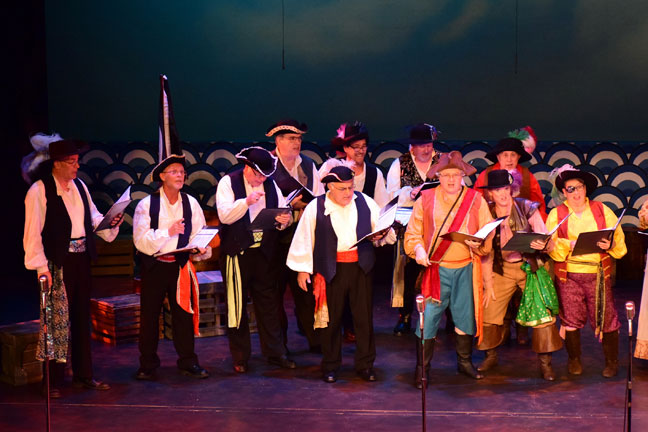