Someone's habits are about to change! When Deloris Van Cartier witnesses a murder, she is put into protective custody in a dying convent. Disguised as a nun, she finds herself at odds with both the rigid lifestyle and uptight Mother Superior. Using her unique disco moves and singing talent to inspire the choir, Deloris breathes new life into the church and community but in doing so, blows her cover. Soon, the gang is giving chase only to find them up against Deloris and the power of her newly found sisterhood. Filled with powerful gospel music, outrageous dancing and a truly moving story, Sister Act features original music by Tony (TM) and eight-time Oscar (TM) winner Alan Menken (Newsies, Disney's Beauty and The Beast, Little Shop of Horrors.) This uplifting musical was nominated for five Tony Awards including Best Musical. A sparkling tribute to the universal power of friendship, Sister Act is sure to have you rejoicing!

"Strong, funny and touching, this is more enjoyable on stage than it was on the big screen."
- The London Telegraph

Sister Act is a feel-amazing hit musical comedy. While the story does hinge on police hiding the lead character Deloris in Witness Protection after witnessing a murder, Sister Act is a joyful and inspirational comedy about the power of friendship and finding one's family. Sister Act will be perfect for older Elementary, Middle and High School Students.

Live gun fire and water based haze/fog may be used in this performance.

Approximate run time for this production is 2 hours and 30 minutes plus one 15 minute intermission. 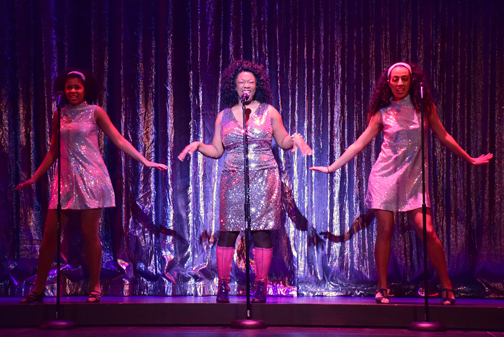