Each season, since the early 1940s, thousands of youth from the greater Kalamazoo area have been entertained and educated through attendance of or participation in our Civic Youth Theatre program. For many of our young patrons, a Youth Theatre production serves as an introduction to theatre as an art form. Youth involved in a production learn very quickly that it takes a lot of hard work to put on a show. As they memorize lines, paint scenery and collect props, they are also building friendships and develop self-confidence that will last them a lifetime.

"Oh, the thinks you can think" when Dr. Seuss' best-loved characters collide and caper in a fantastical musical extravaganza! Transporting audiences from the Jungle of Nool to the Circus McGurkus, the Cat in the Hat narrates the story of Horton the Elephant, who discovers a speck of dust containing tiny people called the Whos. Horton must protect the Whos from a world of naysayers and dangers, and he must also guard an abandoned egg that s been left in his care by the irresponsible Mayzie La Bird. Ultimately the powers of friendship, loyalty and community emerge triumphant. This colorful and zany production will win the hearts of kids...and kids at heart - so let your toes tap, your fingers snap and your imagination run wild!

The Civic is committed to introducing and educating youth to the imagination and wonder of live theatre. Seussical Jr. is a highly imaginative musical and ingenious amalgamation of many of Dr. Seuss' books. The combination of childrens literature's best loved author and musical theatre will inspire a lifetime love of theatre and live performance.

One hour and 15 minutes without intermission.

Water based haze may be used in this production. 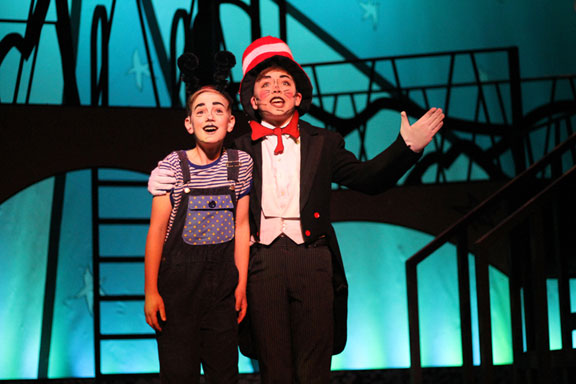