Leave the kids at home and relive the eighties with the loudest, proudest show of the season! It's the tail end of the big bad 1980's in Hollywood where the party has been raging hard. Aqua Net, Lycra, lace, and liquor flow freely at one of the Sunset Strip's legendary venues, a place where heartthrob Stacee Jaxx takes the stage and eager groupies line up to turn their fantasies into reality. Amid the madness, aspiring rock star Drew longs to take the stage as the next mega-star, but his rock and roll dreams are about to end when German developers sweep into town with plans to turn the fabled Strip into just another strip mall! Can Drew and his gang save the Strip before it s too late? Rock of Ages takes you back to the time of big bands, with big egos, playing big guitar solos. A Broadway musical featuring hits from Journey, Bon Jovi, Poison, Styx, Pat Benatar, Twisted Sister and others, Rock of Ages has it all.
Disclaimer: This is best enjoyed by teens & adults.

"As the show opens with blinding lights, shredding guitars and hammer-handed drumming, even nonbelievers may start inhaling the Aqua Net and embracing their inner rocker."
- Variety

Rock of Ages is a parody of 1980's heavy metal rockers and it does contain scenes of bawdy dancing, mischievous behavior, suggestive and adult language and comedic reference to drug usage and may be best enjoyed by older audiences who are prepared for the clever comedy behind the spirited rock ballads and energetic guitar solos.

Sometimes it's just fun to remember back to a meaningful time as we were growing up. However for some of us - that was during the 1980's, which had us wearing glittering spandex, big hair and mullets. Rock of Ages is a feel good fun musical tribute to youth, the fun of being carefree, and chasing your dreams. The joy of the show is not just its blend of sincere conviction and the rock anthems that will make you want to sing along, but the way it knowingly parodies the big hair, and big rock and roll of the 1980's.

Water-based haze, water-based smoke, flashing lights, type B laser and pyrotechnics may be used in this production. 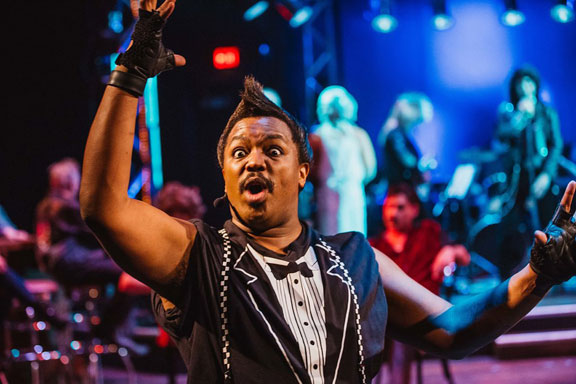