AN EXCITING NEW EVENT! Our Civic Shakespeare Festival will feature a youth theatre and adult production at the same venue. Both Shakespeare productions will be run in repertory, alternating performance nights and both shows in one day on Saturdays.

All hail a surprising new Macbeth! The Scottish play or Macbeth as it is known to the world, will entice audiences with its simple plot, its witches and ghosts, and its clear moral questions about the lure of evil and how we control our own fates. At the beginning of the play, a brave Scottish general named Macbeth is a loyal subject to King Duncan. After Macbeth receives a prophecy from a trio of witches that one day he will become king himself, Macbeth is overcome by greed and ambition. Bolstered by the prophecy and his wife's encouragement, Macbeth kills King Duncan and takes the throne for himself, descending into a complex psychological drama filled with of violence and betrayal. He then becomes wracked with guilt and paranoia and lives out his life with thoughts of bloodthirsty enemies on the battlefield, double dealing politicians of the court and would-be assassins in his own home!
Disclaimer: This is best enjoyed by teen & adult audiences.

While Macbeth is a classic of world literature it does contain intense scenes of violence and the bloody outcome of a murder and may be best enjoyed by prepared older middle and high school students and adults.

Written at the pinnacle of Shakespeare's career and considered one of his four great tragedies, Macbeth provides us with a vehicle to examine the rise of political power, ambition and downfall. Our production will be given a modern setting in order to explore its themes of evil and the corruption of the human soul and how they are relevant to a contemporary audience much the same way they were to Shakespeare's audiences.

Haze, live fire and gunshots, and chemical based smoke may be used in this production. 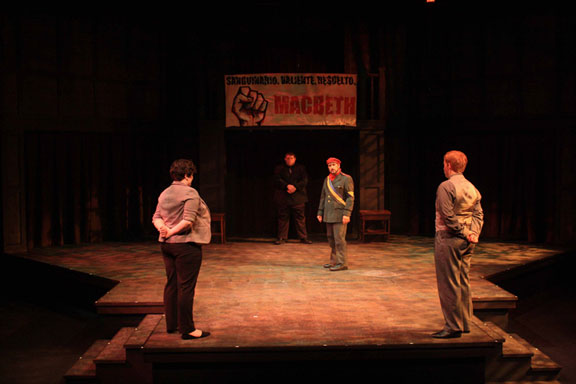