In the country of Sudan in the 1990's, after civil war destroyed their villages, an exodus of boys walked 800 miles across Africa, finally making it to refugee camps in Kenya, where they lived on a bowl of grain a day for 10 years. In 2001, the U.S. resettled 3,600 of these "lost boys" in cities across America. Lost Boy Found in Whole Foods tells the story of the recently divorced Christine, who meets Gabriel, a former "lost boy" working in the produce section of Whole Foods. Moved by his story, she offers to help, inviting him to live with her and Alex, her teenage daughter. Gabriel's world becomes enmeshed with his American hosts - leading to an unexpected journey of awareness, struggle and hopefulness - and what can happen when we open ourselves up to help another human being.
Disclaimer: This is best enjoyed by teen & adult audiences.

"...a comment on fate, unfairness and the limitations of the supposedly indomitable human spirit."
- New York Times

Lost Boy Found in Whole Foods deals honestly with violence, death, and the tragedy of civil war in the Sudan, and is best enjoyed by prepared high school students and adults.

As the world evolves into a more complex place, theatre can be a way to help us understand each other and become a bridge between cultures. Lost Boy Found in Whole Foods is a multifaceted and nuanced play about personal relationships and the challenges immigrants face when they adapt to living in this country. Rather than being a history lesson or moral fable about the Sudanese "Lost Boys" it portrays real human beings, with their complexities, their flaws and their need to connect to one another.

There will be live gun fire in this production.

This productions run time is approximately 2 hours plus one 15 minute intermission. 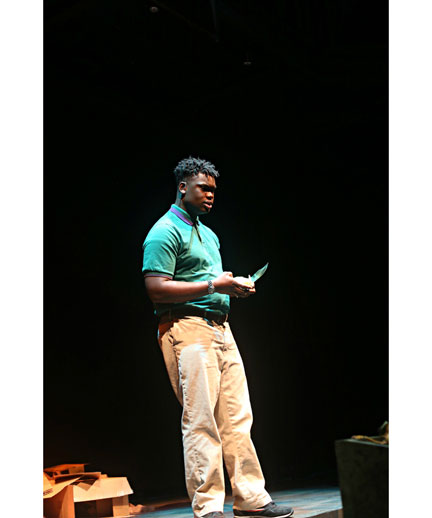