Set in a northern English mining town against the background of the 1984 miners' strike, Billy Elliot is the inspirational story of a young boy's struggle against the odds to make his wish come true. Billy comes from a family of coal miners, but dreams of becoming a ballet dancer, even though his father wants him to box. Follow Billy's journey as he stumbles out of the boxing ring and into a ballet class, and discovers a passion for dance that inspires and changes his family, his community and his life forever. Based on the international hit film, and featuring a score by music legend Elton John, Billy Elliot is the winner of ten Tony Awards, including Best Musical. This spectacular show was also named TIME Magazine's "Best Musical of the Decade!" Billy Elliot is an astonishing experience that will stay with you long after the final curtain.

Winner of 10 Tony awards, including best musical, Billy Elliot the Musical is a heartfelt and inspirational musical about one boy's journey from the boxing ring to discovering his passion to be a dancer. The musical's overarching historical context - the British mining strike of 1984-1985 - gives us insight to the intensely personal struggles of people fighting to preserve the traditions of their working-class community.

Water Based Fog, Haze and Smoke as well as Strobe Lights may be used in this production. 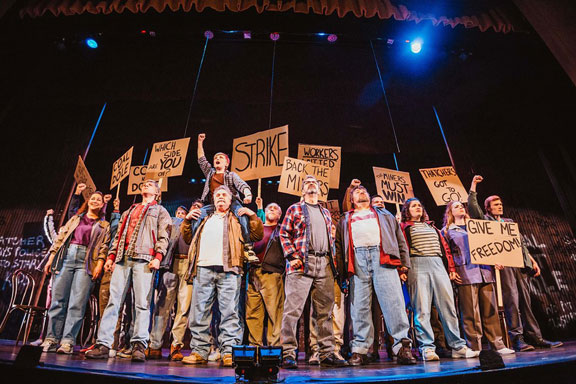