Get your deerstalker hat on "the play's afoot! Comedic genius Ken Ludwig (Lend Me a Tenor, Moon Over Buffalo) faithfully transforms Sir Arthur Conan Doyle's 1901 classic 'The Hound of the Baskervilles' into a murderously funny adventure and Sherlock Holmes is on the case. The male heirs of the Baskerville line are being slain - one by one. To find the clever killer, Holmes and Watson must brave the deserted moors before a family curse dooms its newest heir. Our valiant investigators try to escape a dizzying web of clues, silly accents, disguises, and deceit as five actors portray more than 40 characters, dashing madly from rainy London to the famous foggy mire.

"...howls of laughter as this screamingly funny production ran its antic course of farcical fun and faux terror..."
- Encore Michigan

Baskerville is an ingeniously funny and theatrically inventive farce from the pen of playwright Ken Ludwig. It's a thrilling whodunit, so there is talk of murder and mayhem, but no graphic violence and will be best enjoyed by audiences of all ages.

Farce is a style of comedy which uses exaggerated characters in extravagant situations facing a number of outrageous situations. It is as old as the Greeks and as modern as I Love Lucy and The Simpsons. With Baskerville, playwright Ken Ludwig, master of the modern farce, has crafted a fast paced comic thrill with 5 actors portraying 40 characters. Instead of a heady who-done-it, Baskerville successfully blends the outrageous situations of farce, the action and intrigue of classic mystery and the imagination and inventiveness of live theatre.

Two hours including one 15-minute intermission. 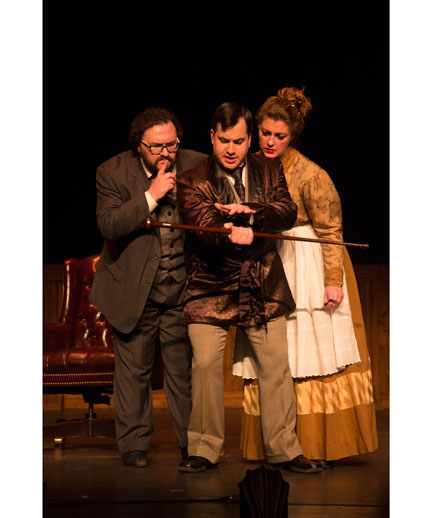